Our job is to tackle a new mystery every half hour. Your GP takes care of your chemistry, we take care of your physics.

Chronic and Complex Pain: We are not frightened by pain drawings like these. Saddened, energised, but not frightened or overwhelmed. Often these people don’t tell the whole story for fear of overwhelming a practitioner. If we hear the whole truth, we usually get clues. 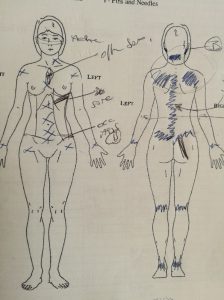 Nor are we promising miracles, but a proportion of the pain in any complex case is usually “optional extra”. Even if we can only take 20-30% off a pain region, quality of life changes.
We are happy to work alongside your surgeon, rheumatologist, neurologist, sports physician or pain specialist. If we think you need one of these you don’t already have onboard, we will discuss it with you and your GP.

Sprains, Strains, Work, Sport and Car injuries: If you have an injury under 3 months old, we are delighted to see you. You could be our easy one for the week. Good first aid, good healing conditions, and managing risks of aggravation often give us job satisfaction. And yes, we can compromise our ideas around the realities of pre-schoolers and your job.

Radicular pain: It is not uncommon for a patient to say, “I feel like I need to be put on one of those medieval torture machines and stretched.” We are always delighted to say, “That’s OK, we have one.” 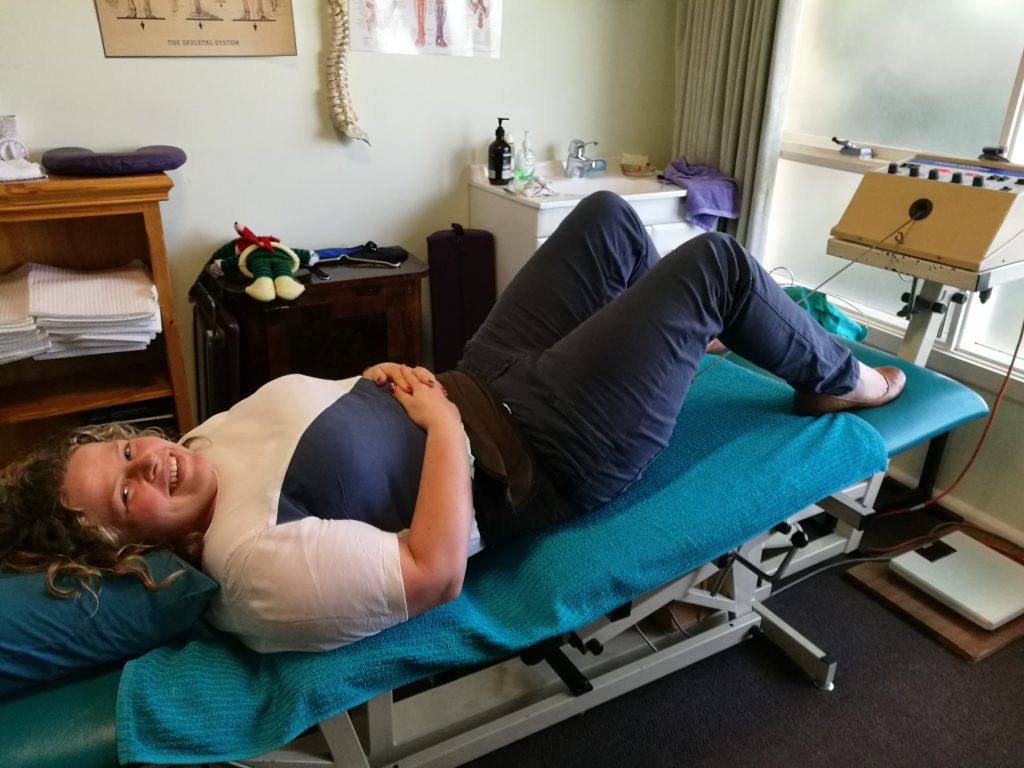 Our sciatica and radicular arm pain patients often find our traction machines helpful. The pumping action of traction can disperse swelling around the squashed nerve root. A patient’s instinct for what is needed is worth respecting. 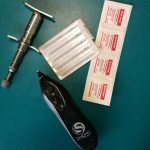 Fibromyalgia. Our Fibromyalgia patients find manipulation/drop piece/impact hammer, dry needling or microcurrent desensitization produce much less post-treatment pain than massage or trigger point compression. We will not push you to do exercise you can’t do. 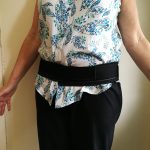 Migraine. A proportion of migraines are a job for us. We will generally have demonstrated if we can help within 3 visits. Often recurring migraine has a mechanical problem feeding in to keep it going. Whether that is your badly fitting false teeth, or your habit of sleeping flat face down with your head turned 90 degrees, until we find the cause we can’t get the problem to stay away.  So we will be thorough. Yes, food triggers are important. We are often stunned to find migraineuers who have never been offered migraine aborting or preventing drugs. If you are willing to use these, a quick note to a GP can give you days back.  At best, with treatment the migraines stop happening, and you don’t need the drugs; at worst, they get as much control as is possible.

A Second Opinion? Something is not quite getting better as you had hoped? Someone is proposing an injection or a surgery you are wary about? We are happy to provide a discrete second opinion. As chiropractors have no vested interest in spine surgery, sometimes it helps to hear why we think it is a good idea. Or not. If it is a good idea, often it helps if we take TIME to explain the surgery, and dispel the urban myths. In doing this work we are very careful about the extent of our own knowledge, and may refer you on to someone we feel is better qualified to give a second opinion on your case. We will try to get you toward a less distressing point in your process. 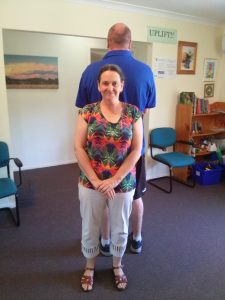 Big People: We are able to handle patients of all sizes. Some of our “giants” have been using us for over a decade. (Mechanics, ambos, police officers and firemen often overdo things.)

Patient preference for or against any tool will be respected.

Traction Machine: One of the oldest, most appreciated tools in the clinic, useful for low backs and necks. This is useful for pumping away swelling in the tight spaces around a nerve root that is being squashed by a disc bulge or by swelling around some annoyed arthritis.

It is also useful for loosening shortened, stiff ligaments and joint capsules in the spine, as when a person (without inflammatory arthritis) wakes stiff in the morning. You get 3 times as much separation with alternating traction as with static, so zig-zagging on our traction unit for 5 minutes gets the same benefit as being stretched out still for 15 minutes. +(reference)

Current meta analysis suggests traction is not helpful. We, however, are able to proceed on clinical trial. If it works for you, but not for 40 others, it still works for you. If it doesn’t work for you we don’t do it twice. 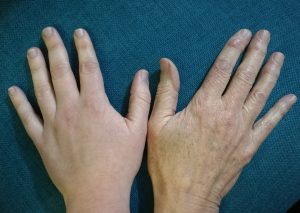 Our hands. Chiropractic means “Done by Hand,”and while we are very grateful to have other tools now, hands are still the core of our tools. We use them to examine, to manipulate (crack), mobilize and massage. Ashlynn’s look young, like you will get years out of her. Liz’s look like they’ve been around a bit.

Drop Pieces and Impact Hammers. High velocity, low amplitude manipulation, the classic chiropractic manipulation, is a great tool. Chiropractors have developed a few alternative ways of getting similar results. The impact hammer produces a very fast thrust, allowing us to influence the joint without using as much force as manual manipulation, or having you in awkward positions.

Drop pieces allow us to use shearing force generated when the surface and the body are in motion and the surface stops suddenly. Again, the overall force used can be less than manipulation and the positions less awkward.

Myotech (TM) brand Dry Needles: Dry needling is effective and often less painful than having us squash your painful trigger points by hand. We are fussy about the needles we use. A 2014 paper from RMIT  (1) showed commonly used needles under an electron microscope, and the tiny flakes of metal that came away when they were used in a standard test substance that replicates human flesh. It was offputting, and we aren’t going near them!

Myotech needles are made in China, but by an Australian company, using German steel and have a parylene coating that aids insertion. We are comfortable using this product.

Extracorporeal Shock Wave Therapy Unit: This tool is a delight when dealing with many musculoskletal complaints. There is a mountain of research to show the effectiveness of this tool with tendinopathy issues, particularly rotator cuff, tennis elbow and Achillies injuries to mention a few. Other complaints such as bursitis and plantar fasciitis, as well as generalized muscle pain/myofascial pain also often respond beautifully. Having had a trial unit for a few weeks we were hooked. It is not a panacea, but it can get substantial changes in pain in a single session, and people with rotator cuff pain often sleep better after one session. There is discomfort when the shockwave is applied to the symptomatic area. This resolves within about 20-30 seconds. As with all our treatment modalities, the force is variable and we can make adjustments as required. In the same way that manipulation makes gas cavities occur in joints, shock wave makes them occur in soft tissues. The result is a large stimulus to the healing cascades. Generally if shock wave is going to be successful we need between 6-10 appointments. These appointments are shorter than our standard visits, and cheaper.

Microcurrent direct current neurostimulator: This was introduced to us by Jay Shah, an absolute gentleman of a researcher, in mid 2018. Usually we’d be cynical about anything black, beepy and electrical unless it was made in Canada or Germany. This one was made in Canada, and went through it’s safety approvals in 2007. We can use it on absolutely anyone who doesn’t have a pacemaker. It is currently used for pain management in over 800 hospitals world wide. 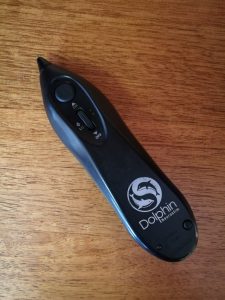 This is one way arthritis generates ongoing pain. It keeps on putting 150 signals through, the cord keeps sensitizing and sparking off pain signals, even when the joint is OK.

This “optional extra” pain can be switched off by using the microcurrent stimulator, or dry needling. While needling is a stronger stimulus, the stimulator is enough in many cases. Lots of people prefer to avoid needles, and we prefer to avoid the environmental impact associated with needles; the needle itself, the plastic waste and foil lined swab packets.

If, or when, the segment becomes sensitized again, as happens in arthritic hands that are still working for example, stimulation can be used to turn it off again. How long between the need to do this varies with how fast the person rebuilds the signal problem. It can be weeks to months. (Or annually if you insist on skiing on that knee again…)

This is a direct current stimulator. Humans work on direct current, but all electrical medical devices before this one were alternating current. This one can be set for polarity. We set it to negative, it locks on the points of positive charge, and once we have a lock, we start a current which will neutralize the positive site in 20-90 seconds. It’s a micro-current, below the threshold that the body can feel. You can’t feel the current, but occasionally people with old pain do feel strong discomfort at a site, and we can move the tool away by 5mm and get a result without discomfort. Other than that it feels like a ball point pen being pushed against your skin.

(Our running joke is that this is like a cross between a stud finder and something out of Star Trek.)

Central sensitization does not benefit from this intervention.

Need some help? Send us an email and we'll get back to you, asap.